skip to main | skip to sidebar

I'm a teacher, so my job requires I leave the house by 7am and return by about 4:30 p.m. These are not the least family-friendly hours by far. However, Co does freelance work from home, so she is the one available to do all the drop-off and pick-up of the children.

This arrangement wasn't always the case. Until he was two years old, I took Jo on the train to and from the staff daycare at my school every day. Anyone who spoke to me during that period probably knows far too much about my subway travails. I complained about it, but I also treasured that role, the extra time with Jo, regardless of its quality.  Especially as the non-bio mom, that first time around, I appreciated the opportunity to do the hard work of handling childcare.  I prepared his breastmilk bottles, and later his food; dragged blankets back and forth for laundering; entertained Jo on the train with snacks and books and silly songs.

Last year was Jo's first year at a daycare near home instead of at my job. We ended up with a babysitter for Cho, rather than daycare (not our original intent; long story) so there was no drop-off or pick-up for her, plus the sitter picked Jo up from daycare. I usually arrived home 15 or 20 minutes before the sitter left for the day, and dashed around trying to do things like walk the dog, unload the dishwasher, and write a lesson plan while Co finished up her work day. This year brought more changes: Jo is in a pre-K from which he has to be picked up by 4pm; Cho is now in daycare (a fabulous one recommended by Mean Mama) and we structured her hours similarly. Since I can't reliably be home quite that early, it all falls to Co. It's not forever and she's cheerfully willing to shoulder this burden. I'm grateful for that.

The part I struggle with is arriving home to my family already together, feeling for a brief moment like so many things I don't want to be: an outsider. A dad, home from the work day. A visitor. Co reassures me -- and sometimes, she even manages not to roll her eyes -- that the extra time she gets with the children involves such enriching and rewarding tasks as trying to get them dressed and in and out of carseats. I know I'm not missing anything glamorous, but I still wish I was more present. I want to get to talk to the teachers and feed the kids breakfast and yes, even fight with them, because that's the stuff of parenting.

Ultimately, though, none of this is forever. My teacher's hours frustrate me at times, but the flip side is that I get vacations with my kids. This year that's mostly been Jo, because he is on a public school schedule. Over the summer we can take Cho out of daycare (but keep her spot for a small fee) so I'll get the time with her, too. And next year will bring more changes, since Jo will be in kindergarten. He will likely attend an afterschool program with hours just late enough so that I can pick him up, at least some of the time.

But this year I've been struggling with feeling absent. And a part of that, for me, means continuing to struggle with what it means to be a mom in a two-mom family. If Co is inhabiting the role traditionally given the "mom" (as far as shuttling the kids around), then who am I? There are many excellent answers to that question, but there have been some dark times this year when I didn't think there was one at all.
Posted by Lo at 8:51 PM 4 comments:

I really can't believe it's been more than five years, lots of medical procedures, and two children since I started this blog. I did it to participate in the online community I had discovered of other folks working on creating their families through alternative means. Almost none of those folks are blogging anymore, though I am still in touch with many of them. All of them have moved on to new phases in their family-building, with or without children included.

SInce 2006, people have migrated to different sorts of online communities. But none of them allow for the kind of long-winded musings that I prefer both to write and to read. And now, after four years of parenting, and experiencing both nonbiological and biological motherhood, I feel like I have a lot to say and to share. I think those conversations are still going on in some corners of the blogosphere, and I'd like to join in.

It's no coincidence that I'm composing these thoughts during spring break -- partially, of course, because it means I have the time, but partially because I am spending my days with 4-year-old Jo, and thinking so, so much about parenting and what it means to be a working parent. It's something I struggle with, because I love my job, and frankly don't particularly want to stay home; but I also miss seeing my kids. I leave early in the morning (by 7am) and get home by about 4:30, and it feels like the dinner/bath/bed routine begins so quickly. I have been loving the long, leisurely days with Jo, playing Lego, doing science experiments, running around the playground. He's been picking out his own clothes in the mornings because he wants to be "beautiful," a lengthy process that could never happen on a harried school day.

As a teacher, I am lucky to have these vacations, so I can truly live the best of both worlds. But the transition between the two lives always leave me pondering.

That's all for now. But hey there, other parents -- however you got there -- negotiating this crazy life. Let's talk. 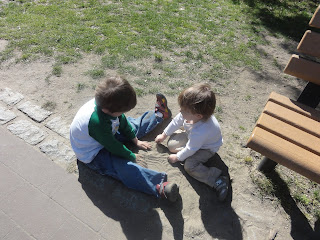 This sunset picture came out nicely, though it isn't a photographic masterpiece. You can see the colors of the sunset, streaked in the sky and across the water; the striking contrast of the foliage turned black by the evening; the small valleys in the sand.

The reason I love this photo is not the colors or composition, but because it's a special place: the beach where Co and I have vacationed since we were a family of three (Mommy, Mama, and dachshund). Dogs are allowed on this beach, and Maggie loves it.

I enjoy taking photographs, but for me the artistry is in the story behind the photo, a visual prop to my words. So I am thrilled to have Photo Friday as a crutch to ease me back into blogging. Thanks, as always, Cali.
Posted by Lo at 11:47 PM 2 comments:

Our family is not always close or connected, emotionally or geographically. Sometimes it takes me by surprise that there are other people who know the characters in my mother's stories. So this picture has a lot of power for me. 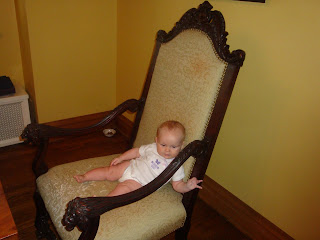 Here is Cho a few months later in the red rocking chair that was mine as a child. 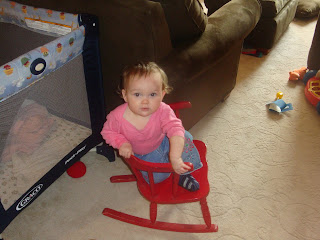 Here are some orange scenes from our October:

Jo at the pumpkin farm: 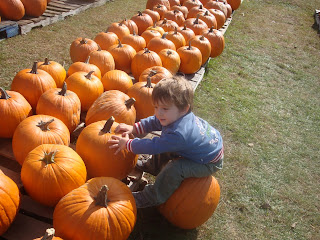 The newly-opened playground, across the street from our new home: 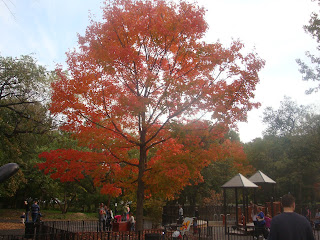 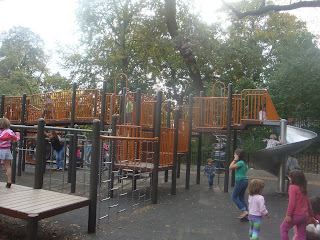 Cho in the leaves: 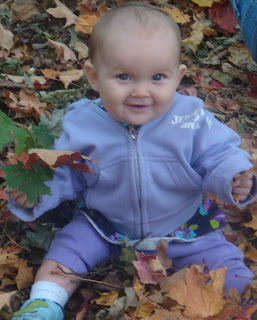 I showed Jo my scar today.

I didn't plan to show him. Honestly, I never thought about discussing the facts of Cho's birth with Jo. I had fantasized about the ways in which he would be part of her birth story, obsessed endlessly about how much of early labor to keep him around for, dreamed of him running into our bedroom to meet his baby sister (just as I did almost 33 years ago). I've thought a lot about how to tell Cho her birth story. But I never really thought about what Jo might need to know.

He's going through a phase where he wants to be carried all the time. Even if we have his stroller, he'll demand "Carry me!" Yesterday he, Cho and I had plans to meet friends at a cafe that's a ten-minute walk from our new apartment. Jo wanted to bring his scooter, so I let him. That was a mistake: Jo rocks his scooter, but he does not always actually want to rock his scooter, and it inevitably ends up having to be carried. So half a block into our journey, Jo said -- you guessed it -- "Carry me!" As in, carry him in addition his scooter and Cho in the Ergo. I tried, but I literally couldn't do it. That much weight gave my scar an awful pulling feeling that I couldn't bear.

Jo did what any toddler worth his salt would do: he lay down spread-eagled on the pavement and refused to move. I begged and pleaded and cajoled and promised a cookie and then, finally, I said, "Jo, I really want to carry you, but I can't. Mama has a boo-boo and I can't carry you."

He looked up and said, "Where?" I pointed to my belly and he said, "See it!" I promised I would show him "inside" (you're welcome, neighborhood). Then he agreed to stand on the scooter while I pulled him.

So tonight during his bath, I showed him the scar. He cocked his head, pointed to the line and said, "Right there!" Then he tickled me.

I love that little boy. 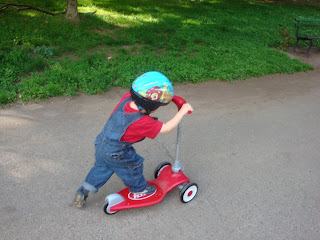 I went to parent-baby yoga today with Cho. There's a particular teacher at the Y who I really like. She gives shoulder massages at the end, sometimes with lavender oil. It's a moment of the sort of nurturing I imagined labor might bring.

She also gave me some tips about how to strengthen my abdominal muscles. When I first tried to do plank pose, seven weeks out, I felt a flash of pain and dropped to my knees in frustration at the reminder of my failure. I tried to turn that pain around: that's the scar that saved my life and my daughter's.

The pain from that slit through my middle has all but disappeared, but it jumps from the shadows at the oddest times: when I'm closing a window. Who knew you used abdominal muscles to close a window? And it itches in this heat.

When I was pregnant, no one ever gave me a seat on the subway, because all the way through the morning I delivered, I just didn't look it. Now I carry baby Cho more visibly, snuggled against my chest (so close to where she was!) and people trip over each other offering me a seat. Honestly, I don't need one now the way I needed it then. But like the lavender massage, it's a healing moment. 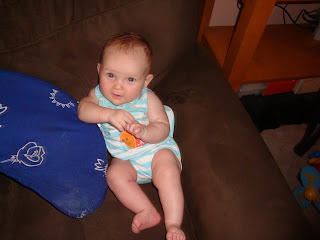 This is a Flickr badge showing public photos from familyo. Make your own badge here.